THIS IS THE MOST UNDEMOCRATIC ELECTION EVER!

Blunder after blunder at the polling booths reveals how ill-equipped New Zealand’s Electoral Commission truly are for this election.  There are reports that on Saturday, as advanced voting opened, the Commission confessed they were not as prepared as they should have been. 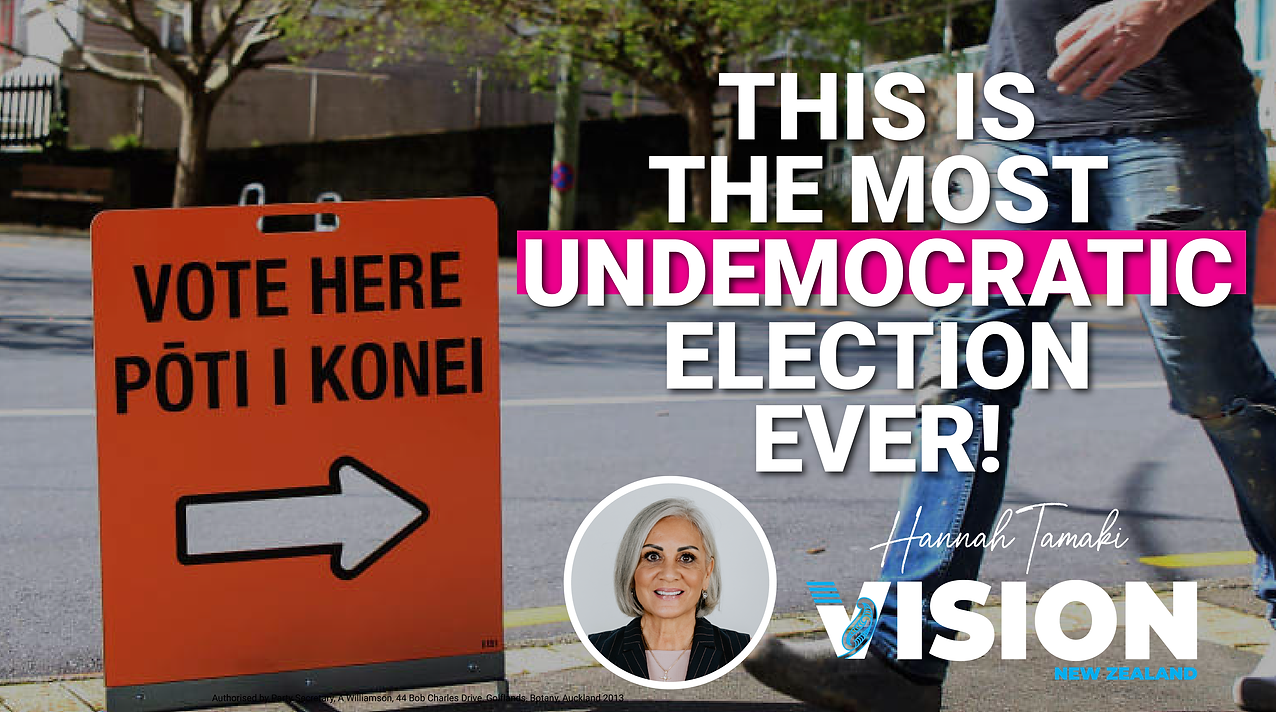 Blunder after blunder at the polling booths reveals how ill-equipped New Zealand’s Electoral Commission truly are for this election. There are reports that on Saturday, as advanced voting opened, the Commission confessed they were not as prepared as they should have been. So far, here is what we know.

• Vision New Zealand has been unfairly penalised in the Port Waikato electorate with the box to tick for their party vote being omitted. The Electoral Commission has only offered a feeble apology, and nothing more.

• There are reports from several voters that Māori rolls have not been available at polling booths when Māori voters have gone in to vote in Tāmaki Makaurau and Te Tai Tonga. This also happened at the last election, and it is shameful that this is still occurring three years later. Māori are already disadvantaged when it comes to voting, and our electoral services continually make it even harder. For this blunder to also occur for our rangatahi as first-time voters, is an outrage. How often is this occurring in other booths, with Māori voters just not sure what is happening, and they naively don’t say anything? Are a lot of uneducated and unaware Māori voters being given incorrect general roll ballot papers? Has this also been happening in Waiariki polling booths where I am standing? As of yet, we’ve been unsuccessful at getting to the bottom of rumours from Waiariki voters on Saturday who said they couldn’t vote for me on their ballot papers when they went into the polling booth. I smell a rat here.

• Prisoners that are eligible to vote are claiming that they are being denied information on this election and the referendums.

Consistently, Māori are proving to be disadvantaged at the polls.

If the major parties were being disadvantaged at the polling booths like this, I’m sure we’d be hearing a lot more about this. It’s the same ole principle of “as long as the criminal doesn’t hit your house, you don’t care!” In all of the cases I mention above, Vision New Zealand is unfairly disadvantaged. The Port Waikato blunder directly relates to us. The Māori rolls not being available affects us as we pursue a Māori electorate seat.

Prisoners not being given the information they need also affects people likely to vote for Vision New Zealand due to our ongoing work with inmates and their families.

Add to all of this the blatant corruption occurring from this coalition government who have politicised the daily COVID-19 briefings with the Prime Minister using this as an opportunity to blow the Labour trumpet. There has also been the bare-faced buying of votes occurring as this coalition government has taken every opportunity under the Cover of COVID, and the open cheque book they have as they print money, to freely splash cash around in electorate seats where they are vulnerable for votes. How is it even democratic that politicians can throw cash lollies like this around in an election year?

Our New Zealand media should be doing a better job of calling our electoral process and officials to account with all of this, keeping them transparent, but instead, they have also brought into the corruption, they are no longer impartial in their journalism and too often they sanitise the news to fit their own personal liberal agendas.

This election has become a real joke. This is an outrage to all minor parties trying to get out of the starting blocks. This is democracy gone wrong!

Join Us And Make A Difference

Lorem Ipsum is simply dummy text of the printing and typesetting industry. Lorem Ipsum has been the industry's standard dummy